Rubya Chaudhry made her on-screen debut in the Pakistani cult classic slasher film, Zibahkhana in 2006. 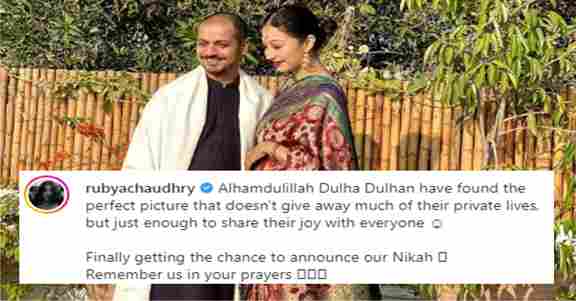 Sharing a picture with her new groom, Rubya Chaudhry wrote that:

“Alhamdulillah the bride and groom got a perfect picture. This photo is not summarizing our private life but enough to share our happiness with everyone.”

He further wrote in the caption of this post that finally we got the chance to announce our marriage. Remember us in your prayers.

It should be noted that actress and fashion model Rabia Chaudhry divorced her first husband musician and singer Mikal Hassan in September 2020. Singer Mikal Hasan and Rabia got married in 2016 in a very private ceremony.

Speaking about her divorce in December 2020, actress Rubya said that life did not end after divorce. Rubya Chaudhry, while talking about the society’s thinking, said that:

“Why do we make girls so poor when they get divorced. Why does it seem like the girl’s life is over now, what happened to the poor thing, the poor thing’s life is ruined.”

The actress has said that it is also possible that due to timely divorce, the rest of the girl’s life is saved from destruction.

It should be noted that Pakistani actress Rubya Chaudhry made her on-screen debut in the Pakistani cult classic slasher film, Zibahkhana in 2006. She worked in Pakistani television shows and movies after that. She has 65k followers on her instagram account. Her insta account can be seen at www.instagram.com/rubyachaudhry .